View cart “A Pilgrim’s Guide to Oberammergau and its Passion Play – new edition for 2020/22” has been added to your cart. 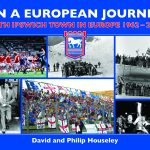